If you’ve been a reader of my website, columns & books for any length of time, then you’ll know of my fascination with the incredible phenomena which is : 11:11

For me, I started seeing 11 11 when I was forty years old, that’s 24 years ago! (Yes, thank you – I can’t believe it either!) I brushed them off initially as coincidence, but after a while I just couldn’t do that any more!

Look at it this way, if you bump into someone in the street twice, you’d call that “coincidence” – but if you bumped into the same person many times per week, no matter where you happened to be, you walk around a corner & out of the blue, the person is standing there – you wouldn’t call THAT coincidence! In fact, you would probably take out an injunction.

But this is the way it is for those of us who have begun to notice this bizarre occurrence.

And let me give you a warning now – you probably will start to see 11 11 now, as anyone who reads about it, tends to start experiencing it.

Here is an example that many people just won’t believe – as this article is the process of being written, my webmaster has just sent me in image from a screenshot of the Google Analytics account, for one of the websites, which gives the days traffic stats for today, and look! :

I couldn’t even begin to tell you the number of instances in which this has occurred, whether it’s that I just get the urge to check the clock – and it’s exactly 11:11, or my plane boarding card will be 11, or 1111, I’ll get to a train station on platform 11, I’ll get texts & emails at exactly 11:11 or send them at exactly 11:11 without realising – it just gets more & more surreal.

And it’s not just me!

I have been absolutely inundated over the recent years with emails about others who are noticing exactly the same. For example,  I have received an email from a friend, with a picture of his boarding card number which was 111 – and just out of “coincidence” on the plane in front of him, was a code printed on the wall in front of him 11:11. – and then the bay that the plane was towed to – was number 11. This was all on the same flight to Cyprus.

This is so bizarre, weird & unbelievable that I’m still amazed by it now every time it happens, even though it’s been happening to me for over 2 decades.

An example of some of my own recent experiences, well there are so many it’s hard to choose – but a good example is what happened on the day that Shipi & I went to stay on Lamb Island with Island man Andrew Strangeway:

So, we’re on the train on the way to Edinburgh, and I just happened to take a picture of Durham Cathedral through the train window. This was the day’s first instance of 11, as my webmaster sent me a text to ask “Do you know that was built in the 11th Century?”. So, OK – that’s no big deal, could be a coincidence.

Then, we arrive at the train station – and have a look at what platform we arrived on: 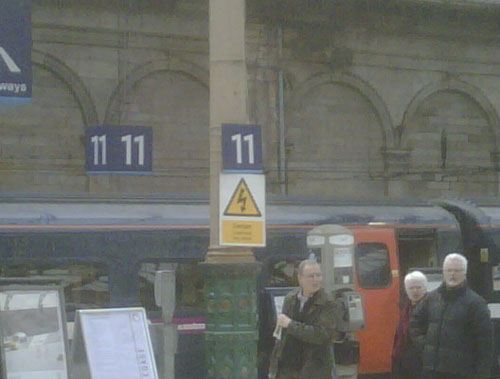 And, the next thing is, I happened to look up at the platform clock to see what time we arrived, and to my amazement, the time on the platform clock, was 11:11 – so I quickly took a snap my blackberry – and somehow I managed to take the snap at exactly 11:11:11, look. 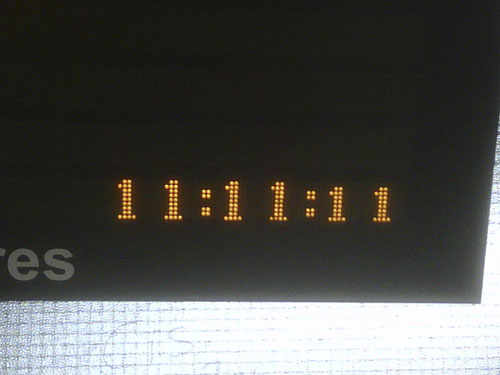 What I find REALLY incredible however, is the instances of 11 & 11 11 throughout history, and particularly in relation to particularly important historical events, events which have shaped history.

Here are just a mere fraction of ones I’m aware of:

The last surviving English world war one soldier to have fought in the trenches,  Harry Patch, passed away last year as the worlds third oldest man, and the oldest man in Europe.  He was 111 years and 38 days. 3+8 = 11.

As far as I am concerned, 11 is a sign of peace. Although some of the reference of 11 are related to war and violence, they appear to be related to events which have united much of the worlds population in the desire for peace.

The most obvious recent example of this is September 11. I have been accused of betraying those who died in the 11 11 attacks for talking about 911 in this way, but I think some people have previously misunderstood me. What I am saying, is that the 11.11 references surrounding this horrific tragedy, fill me with hope that the people who tragically lost their lives in this attack may not have died in vain.

After September 11th there were 111 days left to the end of the year.

The Bali bombing  occurred 1 year, 1 month, and 1 day after the September 11th attacks
The first plane to hit the towers was Flight 11 by American Airlines or AA -> A=1st letter in alphabet so we have 11:11

Another very interesting fact, is that 1111 x 1111 = 1234321. This is bizarre enough, however it gets even more strange when you realise that 1234321 is representative of a pyramid, and that 11 is also a sacred number of the great pyramid, with the proportions of the great pyramid being of the ratio 7:11.

Like I say – I am really only scratching the surface, if I were to sit down & put all of my experiences, all of the experiences of my friends & family, and those who contact me on a constant basis telling me about their bizarre 11 11 encounters, and all of the references of 11 11 that I am aware of & finding out about all the time – I would be in the process of writing a huge book, rather than a column for my weekly diary.

If you didn’t already – I would be very surprised if you did not start to now notice this phenomena. The initial reaction is fear, fear of the unknown – but I believe that 11.11 is a sign of peace, and a reminder to find life balance, so when you do see it, welcome it, be amazed by it, see it as a positive sign that the world is improving, and that your life is improving, and that despite the seeming doom & gloom in the worlds economy – we are heading towards a time of light, and of peace.