Thank you very much for your interest in Abid.  We did not contact you earlier, as we wanted to have significant follow-up information on his postoperative course in order to convey to you the diagnostic conclusions, as well as the procedures that Abid underwent during our care over the last three weeks.  I would first like to introduce my self. I am a cornea transplant surgeon that has moved to Athens full time for the last 2 years. I had spent 15 years in the US, and I am still holding an Associate Professor position with New York University, mainly working with the student doctors when I visit NY.

Just to summarize his clinical situation, we saw him for the first time on April 19, 2004, at which time his visual acuity in the right eye was count fingers at 50 cm and in the left eye, just bare light perception (questionable).  The eyelid movements from the very significant face burn were almost non-existent.  He has had several plastic surgical procedures on both of his eyelids and as a result, the right eye has a significant tarsorrhaphy, which means the upper and under eyelid are sutured together and permanently heal together.  This was done in order to reduce the amount of the surface of the eye that is exposed to the external factors and reduce the chance that the surface part of the eye could deteriorate.  He underwent a procedure where the front part of his eye was covered with opaque tissue in order to protect the front part of the eye, the cornea, from perforating due to exposure to external factors.  That eye appeared to be his good eye.  We had some visualization of the inner parts of the eye, and on ultrasound, the anatomy appears to be normal.

His left eye was basically written off by the fellow clinicians in Pakistan who, I should add, have done a remarkable job in putting together his visual rehabilitation.  We evaluated that eye as non-phthisical (phthisis is a condition where the eye has permanently degenerated and has become smaller in size, and soft).

We entertained the possibility of recovering some vision in his left eye.  We had clinical signs that this eye had the ability to discriminate between red and green light, and went ahead with a team consisting of a retinal surgeon and an ocular plastic Mr.

surgeon to perform a kerato-prosthesis, where the front part of the eye is replaced with a structure of plastic and corneal transplant tissue in order to create a window of the eye to the outside world.  Following that, the retinal surgeon corrected a retinal detachment using laser procedures and silicone oil.  The plastic surgeon took skin grafts from behind his eye in order to reconstruct his lower eyelid.  As a result, over the past two weeks his left eye has been able to recover visual acuity of count fingers at 10 cm.  His visual potential remains guarded, and time will tell if we are able to permanently rehabilitate this eye in a significant way, which I should underline was basically considered lost.

I am including pre- and postoperative photo’s of the left eye. 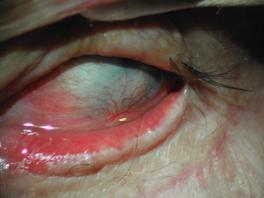 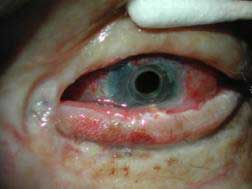 With regard to his right eye, we had the ability to perform several clinical evaluations.  The right eye has the handicap of not having any muscle in his upper eyelid to protect the eye when it is closed.  Therefore, any procedure performed in the right eye would always run the risk of extensive exposure to the external factors, and the possibility of failure.  We had planned on 4 May 2004 to perform a penetrating keratoplasty, which would change his cornea with new, donated tissue, but were unable to perform this procedure due to anesthesia problems, although we tried to anesthetize the eye twice.  However, due to extensive scarring, the anesthesia disappeared within minutes and we were unable to proceed with the surgery under local anesthesia.  Therefore, we tried general anesthesia, an entity that was very difficult on the first procedure, and impossible on May 4th, since a team of four anesthesiologists in one of the most prestigious hospitals in Athens were unable to intubate him due to the significant strictures that he has in his neck from the chemical burn and the inability to safely visualize the windpipe during employment of the anesthesia.

I felt, it should be considered too much of a risk at this point in time for a procedure that would give him some visual acuity back, but with questionable longevity.  However, we were nevertheless able to remove some of the scarring that he had on the surface of that eye, and are hopeful he will gain more vision from that eye.

We have all this time started him on special medications in the right eye, which under our care was also diagnosed with significant glaucoma (high pressure). He has responded well with better pressure control on these medications that are also available in his country.

With a special video device we have been able to have him read, and this has been very rewarding. His expectations are quite high (and I do not blame him). We have to though, to be very cautious with his progress, in order to do more good than harm.

Although we are a private center we have provided all care, medications and materials to Abid from our funds and we dearly appreciate your initiative as well to help with his travels. Within the next few weeks I feel we will be able to finalize our plans for now and have him return home.

Please feel free to contact me for any additional information, and I truly look forward to meeting you if your travels bring you to Athens.