Back in November of 1974, John Lennon was sat in a restaurant with Uri Geller in New York City, Yoko was present an conversation was focused on their unborn child, Sean. The talk of babies and parenthood came to a sudden halt when John turned to Uri and started to talk about UFO’s.

Geller, who has recalled the conversation in an article he wrote for the Telegraph, said that Lennon believed in life on other planets and also that this planet was being visited by an E.T presence. The conversation took and even weirder turn when Lennon took Uri to another table, lit his cigarette, and began to tell him an extraordinary story.  Lennon gave Uri a mysterious egg, which he still has to this day, saying he believed it was a ticket to another planet.  Not long later, Lennon would be dead.

From Uri Gellers account, the conversation went as follows:

“You believe in this stuff, right?” he asked me. “Well, you ain’t f—in’ gonna believe this.

“About six months ago, I was asleep in my bed, with Yoko, at home, in the Dakota Building. And suddenly, I wasn’t asleep. Because there was this blazing light round the door. It was shining through the cracks and the keyhole, like someone was out there with searchlights, or the apartment was on fire. That was what I thought — intruders, or fire. I leapt out of bed, and Yoko wasn’t awake at all, she was lying there like a stone, and I pulled open the door. There were these four people out there.” 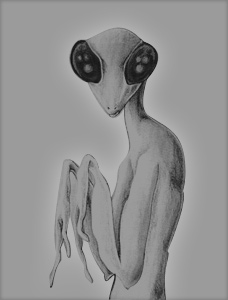 “I was straight that night. I wasn’t dreaming and I wasn’t tripping. There were these creatures, like people but not like people, in my apartment”

“Well they didn’t want my f—in’ autograph. They were, like, little. Bug-like. Big bug eyes and little bug mouths and they were scuttling at me like roaches.”

“I’ve told this to two other people, right? One was Yoko, and she believes me. She says she doesn’t understand it, but she knows I wouldn’t lie to her. I told one other person, and she didn’t believe me.

“She laughed it off, and then she said I must have been high. Well, I’ve been high, I mean right out of it, a lot of times, and I never saw anything on acid that was as weird as those f—in’ bugs, man.

“I was straight that night. I wasn’t dreaming and I wasn’t tripping. There were these creatures, like people but not like people, in my apartment.”

“How do you know they did anything to me, man?” “Because they must have come for a reason.”

“You’re right. They did something. But I don’t know what it was. I tried to throw them out, but, when I took a step towards them, they kind of pushed me back. I mean, they didn’t touch me. It was like they just willed me. Pushed me with willpower and telepathy.”

“I don’t know. Something happened. Don’t ask me what. Either I’ve forgotten, blocked it out, or they won’t let me remember. But after a while they weren’t there and I was just lying on the bed, next to Yoko, only I was on the covers. 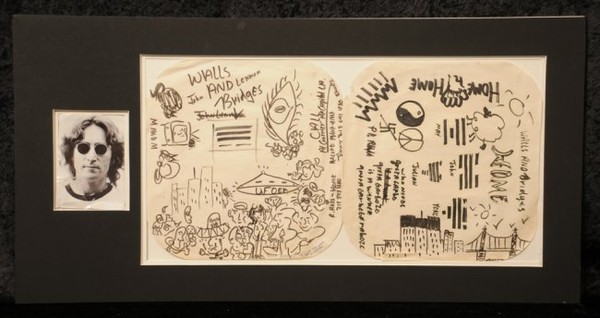 John Lennon’s UFO drawing which has now been sold at auction.

“And she woke up and looked at me and asked what was wrong. I couldn’t tell her at first. But I had this thing in my hands. They gave it to me.”

“What was it?” Lennon dug into his jeans pocket. “I’ve been carrying it round ever since, wanting to ask somebody the same question. You have it. Maybe you’ll know.”

I took the metal, egg-like object and turned it over in the dim light. It seemed solid and smooth, and I could make out no markings. “I’ve never seen anything like it.”

What do you think?  Was John Lennon just high?  Or did he experience something out of this world?