Entertainer and psychic Uri Geller played an unusual role in breaking the ice during talks on a historic deal between the Palestinian Red Crescent and its Israeli counterpart by bending spoons.

Geller, who is head of the Friends of Magen David Adom, a key fundraising arm of the Israeli relief agency, proved the point at the signing ceremony in the Swiss city of Geneva by gently rubbing a few spoons out of shape. 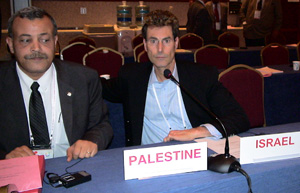 “Uri Geller did not just help break the ice with the skills that have made him famous — a considerable number of bent spoons line the road that led to this agreement,” said Swiss Foreign Minister Micheline Calmy-Rey.

“He has also played a pivotal role in helping everyone focus on the main objective and overcoming differences over secondary details at key junctures,” she told the assembled dignitaries.

A bright-eyed Geller, whose claims to have telepathic powers have been contested, returned the compliment, praising the determination of the negotiators.

“It was sheer willpower,” he remarked with a wink, bending yet another a spoon for Palestinian Red Crescent chief Younis Al-Khatib and promising to stop him smoking

Memorandum of Understanding and Agreement on operational arrangements

Mr. Al Khatib, Dr. Yifrach, Excellencies, Ladies and Gentlemen – It is an immense pleasure for me to host this ceremony today in my home town. 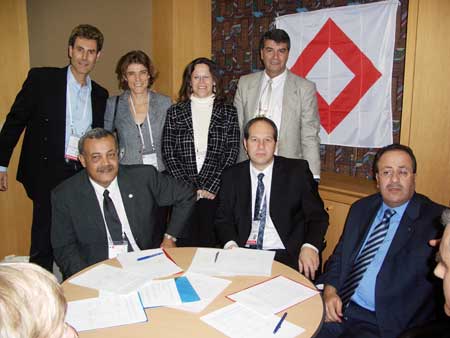 First and foremost, because of the people who are here and who have been involved in bringing about this agreement between the Israeli and Palestinian National Societies. The two principal heroes of this day are Noam Yifrach and Younis al-Khatib – I hope that you will not mind me addressing you in this rather personal way.

I have met both of you separately and jointly during the efforts that lead to this agreement. I feel privileged for this and am keeping unforgettable memories of my meetings with Noam Yifrach and Uri Geller in Bern, with Younis al Khatib in his office in Ramallah and of our joint Iftar dinner in Jerusalem which, I think, was a key event in bringing about this agreement.

We are all very lucky that foresight has placed two men of your calibre at the helm of the Israeli and Palestinian National Societies at this point in time. You have shown lots of courage and wisdom. You have been ready to think out of the box and to go beyond some of the dogmas that are dear to many in your societies and have so far stood in the way of establishing peaceful co-existence and co-operation between your two nations.

You have also shown true humanity in the way you have dealt with each other. You strived to understand each others concerns and constraints and to build something together that allows both of you to go home to your own environment.

Even so, this has not been easy for either of you. Both of you have faced and may continue to face criticism and harsh questioning from people within your societies who have less empathy for the concerns and needs of the other side.

The fact that you have taken these personal risks shows that you are able to think beyond your immediate personal interests. You care about ideals, about the future of the National Societies that you lead and about the future of your people in general. This makes you great disciples of Henry Dunant who was inspired by the conviction that all human beings share something called humanity, that overcomes even the most extreme differences. You have shown yourselves to be more than worthy of leading your National Societies to full membership of the Red Cross and Red Crescent Movement. I sincerely hope that your agreement will pave the way for this common desire, expressed in your Memorandum of Understanding, to be realized in the very near future.

We know that individuals can make a big difference in history, but they can never do so alone. Both of you have been supported by great teams who share your values and attitudes that I have described. I am glad that some of them are her today and salute them too. You have also been assisted by a team of people from the International Committee of the Red Cross, the Federation of Red Cross and Red Crescent Societies and from my Ministry. They have worked tirelessly and with great imagination and insight to help you reach your goal. Among the many I would like to extend special thanks to Christopher Lamb, François Bugnion and Jean-Christophe Sandoz. Their long experience, wisdom, skills and creativity as well as their total dedication to the task greatly facilitated the facilitating role played by the Swiss government.

I am aware that their personal contribution would not have been possible without the support and understanding of their institutions and I am grateful for the opportunity to say this in front of Dr Kellenberger, Mr. Westerberg and Mr Cuvillier, who have been very supportive.

I would also like to thank the President of the friends of Magen David Adom who has shown himself to be a friend of both Magen David Adom and the Palestine Red Crescent Society. Uri Geller did not just help break the ice with the skills that have made him famous – a considerable number of bent spoons line the road that led to this agreement -, he has also plaid a pivotal role in helping everyone focus on the main objective and overcoming differences over secondary details at key junctures.

The agreement to be signed today is purely humanitarian in character. Although it touches upon some very delicate issues it successfully sets them into a context which does not interfere with its humanitarian purpose. It is to the great credit of the Israeli and Palestinian authorities that they have seen this so clearly. I sincerely hope that, even though this agreement does not bind them, they will facilitate its full implementation where this depends on their co-operation and good will.

I have acceded to the request of Magen David Adom and the Palestine Red Crescent Society for Switzerland to monitor the implementation of the agreement and to report on it to the upcoming International Conference of the Red Cross and Red Crescent Movement. We will do so in close co-operation with the ICRC and the Federation and in full respect of their mandates. Given the atmosphere of sincerity and mutual understanding between your two Societies, I am confident that we will be able to fulfil this mandate by working with you in a constructive advisory capacity.

The agreement that you are about to sign represents an important milestone in more than one way:

It certainly does make a crucial contribution for the Red Cross and Red Crescent Movement to achieve its ambition of Universality.

I look forward to meeting you both again in the future, for I feel that we have established ties of friendship. I thank you for your dedication and inspirational commitment, and I close by repeating my commitment to continue to help you both meet the humanitarian needs of your people.