For years, Uri Geller has amazed audiences with his psychic powers. In a special, riveting performance for children and young adults from Ezer Mizion’s Oranit Guest Home for Children with Cancer, the famous psychic bent spoons and performed other feats. The youngsters sat transfixed during Geller’s demonstrations, as he impressed upon his guests the power of positive thinking. He also sat with every child, determined to give each one hope and strength to continue his or her battle. Geller and his wife, Chana, welcomed the youngsters for a visit at their stately home during Ezer Mizion’s recent trip to London for youngsters with cancer.

In what has become an annual pre-summer event, Ezer Mizion flew the 14 youngsters to London, together with four staff members. They were also accompanied by Dr. Sarah Schneider, an oncologist from Scheider’s Children’s Hospital, who operated a mini-clinic in her room so that the kids could continue to receive their treatment uninterrupted. No effort was spared to give the sick boys and girls the time of their lives.

Based at the luxurious Victoria Park Plaza Hotel, the children enjoyed every imaginable treat, gift baskets with a lavish array of goodies and gifts, and sumptuous meals at famous restaurants and private homes. The five-star trip included visits to London’s famed tourist sites including Buckingham Palace, Mme. Tussaud’s Wax

In an extraordinary visit to Hamley’s famous toy store, each child was given a gift certificate that enabled them to indulge their fantasy and buy whatever they had ever dreamed about: computer games, dolls, stuffed animals, etc.

The extraordinary trip was made possible thanks to the efforts of Dr. Bracha Zisser, Director of Oranit, Moishe and Michelle Gertner, Shoshana and Simon Maurer, Naomi and Shlomie Richman, Sam and

Jamie Rubin, Jackie and Vered Schimmel, Yoel and Feigi Schwartz, and Rabbi and Mrs. Vogel and other kind sponsors. Special thanks to Dr. Michael Markiewicz.

“It was such an emotional journey,” noted Shoshana Maurer, who organizes the London trip every year. “It is humbling to see these kids, most of whom come from modest homes and have so little. Yet they all stuffed their suitcases with chocolates and other goodies they received to share with their families. They have this amazing positive spirit. It’s incredible how they can have all these things put on them – and yet have a smile on their faces.

“I’m bowled over by the love and dedication of the staff that came to look after these youngsters,” added Shoshana. “They acted as if they were their own children. They are walking angels.”

The youngsters, inspired by the care and concern shown by everyone they came in contact with, and nourished by the amazing experiences they enjoyed, don’t stop talking about the trip. “Whatever I say is not enough to thank the people who made this trip possible enough,” said Meitar, 18. “I had a super time.”

Nine year-old Yahav loved to dance. One year ago, a malignant growth was found in her brain.  After a course of treatment, the cancer returned and it soon became obvious that the disease was terminal.

Although her situation was grave, the staff at Ezer Mizion Oranit was determined to bring Yahav, who by now could only get around by wheelchair, to London on what they all knew would be her last trip.  At 2 in the morning, before the flight, Yahav was given two units of blood and two units of thrombocytes (platelets) to strengthen her for 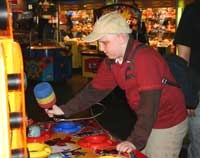 the trip.   Although Oranit invited her mother to accompany her to London, the little girl refused to be different from the other children and asked her mother to stay behind.

“It is impossible to describe what this trip did for her,” noted Yumi Dzialowsky, staff member at Oranit. Despite her very serious medical situation, which necessitated constant medical monitoring and even a visit to the hospital in London, Yahav enjoyed every minute of the trip.  She laughed, she smiled, and she was almost delirious with joy.  At the show Mamma Mia, she even got up and danced!

Upon her return home from this fulfilling trip, Yahav was hospitalized, where her health quickly deteriorated. One week later Yahav returned her soul to her Creator.