Let me try and help you!

You were born PSI

Your sense of danger and your telepathic awareness of your mother were more vital to you in those first weeks than your sight or your hearing.

Somewhere down the years, you gave up on your psychic powers. But you are reading this now – and that is a positive sign that you are ready to explore your innate gifts. Set aside any natural doubts and you can open your mind to the immense, untapped powers of the brain. How to tell if you have PSI ability Have you ever walked into a house and sensed an atmosphere – jolly or morbid, unhealthy or welcoming? If this happens regularly, you have a strong gift for psychometry – the power of tuning into the past through inanimate objects. Maybe you have reached for the phone to call a loved one – just at the moment they decide to ring you or were at a place that you have never been before and it looked to you familiar, probably this amazed you and you called it deja-vu or does your computer crash too often when deadlines loom? Your tension stress could be bombarding its circuit boards

Look at the incredible results from a study at Princeton University in New Jersey by Professor Robert Jahn, published a couple of years ago. He has spent more than a decade carrying out thousands of tests with ordinary people to discover if Mindpower could influence random number generators. The subjects, none of whom had shown any paranormal abilities previously, were invited to stare at a computer that was displaying zeros and ones on screen. The number sequence was not pre-programmed. Jahn told his experimenters to will the number one to appear more often. And it did. The testing conditions were rigorous – after all, Jahn is Dean of the School of Engineering and Applied Science at one of the world’s top five academic institutions. If he published data supporting paranormal theories and his methods were open to criticism, his career would be finished. The evidence that Princeton Engineering Anomalies Research (PEAR) discovered was undeniable and the odds against ordinary people directing their thoughts at a computer and forcing it to react were calculated at 1,000 billion to one against.

These studies should convince you that there’s nothing frivolous about the power of the mind. And you can begin to explore your own gifts today. How to make the most of your mind I can sum up my approach to Mindpower in two words: Be Positive. That means a positive approach to good ideas from every source and every age in history. Forget about fashion, switch off the cynics. Say “Yes” aloud. Say it right now. Instead of focusing first on what you’re saying “Yes” to, just go ahead and affirm it. Your instincts will start hunting round in your mind, looking for the thing you most want to say “Yes” about. Let yourself feel good about it. Your PSI energies now have permission to home in on the areas which intuitively feel right. Positive thinking is a whole toolbox of powerful mind techniques and the most useful tool of all is visualisation. Everyone can visualise – most call it day-dreaming. If you direct your daydreams, encouraging pleasurable images, you are programming your subconscious to expect those good things. And if you’re expecting something, you go looking for it.

Negative thinking is a psychic shortcut to disaster. Suppose you’re worried about the cash flow in your small business – there are 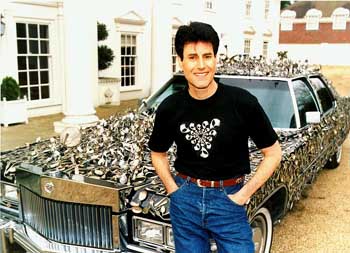 some late payers on the books, perhaps. If you sit and worry, your mind will begin to generate negative imagery. Without meaning to make matters worse, you are programming your mind to expect a bleak future. Positive visualisation can turn this situation around very quickly. You learn to focus on solutions. You imagine great cash flow, you visualise yourself writing that cheque to the taxman and laughing, because you know you can afford it! Very quickly, you feel better. You have more energy and you’re ready to start looking for the answers. For this, Professor Herbert Benson, founder of Harvard’s Mind/Body Medical Institute, advocates a simple programme of focusing and relaxing to fill the mind with pictures of health and happiness. His first step is to pick a word or phrase: “peace”, “Our Father” or “Shalom”. Then, seated comfortably with eyes shut and muscles limp, you should breathe deeply while concentrating on your words. If your attention wanders, gently draw your mind back to the point of focus. Easy, isn’t it? In his book Timeless Healing, Dr Benson says: “These activities produce relaxed, healthy and positive feelings that actually stimulate brain and nerve pathways to reduce stress-related damage and trigger healing. A good time to do it is before breakfast and before the evening meal. Do it every day.” More incredibly, our minds can affect other people’s bodies. When we pray for those we love – or even patients we have never met – it’s possible that we can actually aid their recovery. Medical researcher William Harris, of St Luke’s Hospital in Kansas City, asked Christian volunteers to pray for 466 people in the coronary unit over a year, without telling either the patients or their doctors. Results were positive, with the lucky recipients of prayer faring better than the 524 people who went unprayed for. “If people are willing to accept the outcome of a rigorous drugs trial,” says Harris, “they have to accept this.”. Medical doctors, are beginning to discover that the power of all positive thinking, positive intentions, the power of prayer, and the power of belief, are enormous healers In some medical tests placebo pills were given to sick people, it beggars belief that placeboes have helped cure sufferers of fevers, angina, rheumatoid arthritis, even warts ! the bigger and more dramatic the person perceives the intervention to be, the bigger the placebo effect. A placebo stress-buster tape worked well when subjects were told it had been used on astronauts. This is why my crystals, orange circles, the palm of my hand, works in some cases, because they act as a tool for your mind to trigger and awaken your belief system, which in effect could heal some ailments. Now don’t get me wrong I’m not advising anyone to abandon conventional medicine NO WAY, on the contrary i urge you to have a full medical check up every year, but parallel to medical science. I believe in positive intentions, the power of belief, the power of prayer, and the power of positive thinking. USE THEM !!!

Are you Intuitive ? Practice your telepathic gifts.

You can sharpen your psi sense by having fun with telepathy.
The first step to reading minds is learning to sense someone’s physical presence. Close your eyes, hold out your palm and ask your partner to trace a square, a cross or a circle with their fingertip, half an inch from your open hand. Focus on what you feel on your palm. A tingle, warm and electric, will begin in the sensitive skin. The tingle will quickly take shape… as a square, a cross or a circle. As you become more experienced, try to sense the shape when your partner is just thinking about it, instead of tracing it. Try your hand at psychometry Be bold. Ask a friend to give you an object with a personal history – something you don’t know about. A book, a piece of jewellery, a kitchen implement – whatever it is, hold it and imagine what its secrets might be. This is psychometry, and it’s great fun. People who are laughing at the notion one minute are laughing in delight the next as they reel off whatever ideas enter their heads.

The incredible thing is that novice psychometrists are often spookily accurate. It’s more than beginner’s luck – psi skills work best for people who are not trying too hard – people who are simply having fun. Don’t dismiss déjà vu Déjà vu, perhaps the most common psychic experience, is one of the most mysterious. The standard sceptical explanation is that this phenomenon – when we sense that we have seen a place or lived through an event before – is a brain malfunction, where the two hemispheres of the brain slip out of sync for a second. To many people, it seems more sensible than the idea that we have lived before, and perhaps visited a place in a previous life. I find the idea of reincarnation hard to accept but I will never forget driving through Exeter with my family, as my teenage son confidently described all the streets and buildings before we got to them – though he had never been near the place before in this life. Was he an Exeter lad last time around? One thing’s for sure, he is City’s biggest soccer fan now. Jung, riding through Africa for the first time, felt he was returning to the continent of his past – a 5,000-year-old past. He called déjà vu “the recog-nition of the immemorially known”. Next time you experience this mystical state of mind, don’t brush it aside. Treat it as a wake-up call to your Mindpower.

“I believe we are all connected to an invisible spiritual thread, through which we can transmit information, thoughts, and feelings to each other, even if we never met. Use this channel to send help, prayers, love and positivity to humanity and all our animals”.

Now I want you to read my little book of Mindpower FREE ONLINE because it could help you !