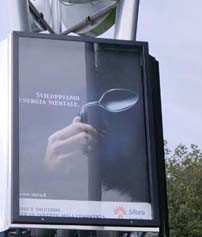 An Italian company uses spoon bending
to inspire their clients. It says:
“Develop your mental energy with a bent spoon” 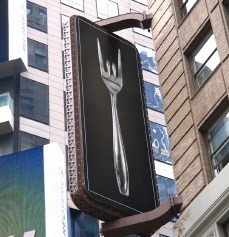 If you hear someone at a bar asking for an ‘Uri’ or an ‘Uri Geller’, dont be surprised.
It’s the latest cult way of ordering a Stella Artois lager in rhyming slang!

Mystic marvel Uri Geller promised to make Sunday People readers’ dreams come true by using his special psychic powers on the amazing palindromic date of 20.02.2002
And what incredible results Uri has as thousands of you tapped into his paranormal powers by looking deep into his eyes.
As our [Sunday People] stories here reveal, many miraculous things happened last Wednesday, some of them life-changing. And Uri – who is famous for making clock work – even got one man’s sex life ticking over again..

“It is my intention, as I write this book; to one day bring Big Ben to a dead stop”. I will choose my moment carefully because I do not want to damage British heritage. I want to prove to people if you have enough faith you can do the impossible. This I wrote on in my book Uri Geller Fortune Secrets 1986 and indeed I stopped the Big Ben on the 16th December 1989 and on the 5th May 1997 at 12.11! Uri Geller 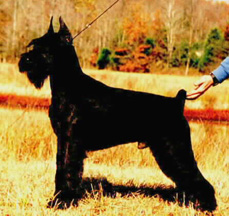 Lionheart Kennels have named one of there best dogs after Uri called, you guessed it Uri.

“The phenomena were witnessed from March 10, 1850, to October 1, 1951. As in the ‘Mill on the Eden,’ many of the manifestations took place when the family were having their meals. And these manifestations included the pinching of the children ; flaming paper found in a bedroom ; raps; the flight of keys, nails, spoons and forks (and these were bent double in mid-air!); the levitation and upsetting of a supper table when no people were in the room; the slashing to pieces of a boy’s clothes (as at Dortmund); and the transportation of the elder boy, who was carried across the room by invisible hands, and deposited gently on the floor.”

The bell witch of Tennessee by Charles Bailey Bell descendent of the witch. 1879 a poltergeist effect “spoons were broken or suddenly twisted out of shape in their hands“.

” Don’t forget that when Uri last used his powers, at the Millennium Stadium, the previously stuck roof suddenly started to move”!
From the South Wales Argus Uri Geller: Believes he helped Newport to success yesterday “I focused my powers on the fans so they would send their energy to the players and I focused on the captain because I had bent a spoon for him. It has been exhausting because I am not used to doing rugby games. I had to totally clear my mind and just focus on winning” 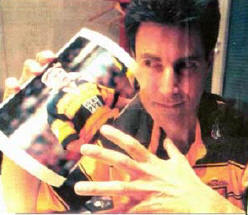 “Touch this picture”, Uri told the readers of the paper ! Uri Geller give Newport RFC the winning edge by using his amazing powers to help Newport In their clash with Neath in the Principality Cup final. He said he put his mind to work on behalf of Newport, who beat Neath 13-8 in Cardiff to take Wales’s Principality Cup for the first time in 24 years. On a recent trip to south Wales Geller was asked to help the team win the game. At 3pm, the kick-off time for the match at the Millennium Stadium, the man famous for bending spoons with his mind was putting all his energies into support the Newport team. Fans were instructed to keep this copy of the Argus – take it with them to the match – and concentrate all there efforts into helping Newport win the Cup. Uri used his powers to bend a spoon over a photograph of Newport captain Gary Teichmann “to give him Mindpower” – which he signed to be given to the man himself. He was also wearing a Newport rugby shirt to help concentrate his energies. Uri urged readers:”Touch my picture and think positively for the team to win.” Don’t forget that when Uri last used his powers, at the Millennium Stadium, the previously stuck roof suddenly started to move”!!!!

Psychic Uri Geller claims he caused the Olympic flame to get stuck as it was winched to the top of Stadium Australia during the opening ceremony.
Geller said he had concentrated his mind to make the cauldron of flames appear to stall on its journey after being lit by Australian Cathy Freeman.The mechanism carrying the steel bowl of flame appeared to stop at one point.
Reported by ITV Teletext on the 15/9/00
Webmasters personal note: During a trip to Uri’s Home in August he said to me personally he had something special planned for the Olympics!

KNOKKE Belgium scientists are baffled by an amazing psychic fetus that can bend forks and spoons with his mind alone – from with in the womb!
“This is extraordinary” declared research psychologist Dr David Sydlebaum. Who has probed the case along with six other university scientists? “That kind of ability has been seen among famous psychics like Uri Geller – but never before in an unborn child.”

The family’s name is not being divulged to protect their privacy although a photograph was released. And Dr Sydlebaurn did reveal that. The parents of the baby who is five months along. both appear to have ESP in their genes.

“The mother is a newspaper psychic and the father’s mom used to teU fortunes in the 50s.” the expert revealed. “This seems to point to a genetic factor.’
The mother, age 31, first noticed something very odd was going on when she was eating a bowl of spaghetti and her fork suddenly begin to bend on its own accord.
“At the same moment, I felt a
Kick,” she later told researchers.
The uncanny phenomenon happened again and again until an entire set of tableware was ruined. Each inexplicable episode was accompanied by a movement from the unborn child, identified only as Baby K. Concerned; the couple consulted a neonatal specialist, who was able to capture the bizarre effect on ultrasound.
“The baby would push out with his hand and make a kind of grasping motion – and small metal tools in the room would suddenly bend.” Dr. Sydlebaum said.
The specialist consulted other experts and before long, a team composed of researchers from a variety of fields, from physics to neurology~
Were studying the fetus.
We’ve observed this phenomenon under controlled laboratory conditions and we can confirm that the baby is really doing this – although we can’t say how.” Dr Sydlebaurn said. “We even had a pair of professional magicians in the room while Baby K was doing his ‘act’ and they verified that no trickery was involved.”
The fetus appears to have ability
That paranormal investigators call telekinesis – the ability to move objects at a distance expert said.
..~ You might imagine, we’re anxious to run a battery of tests on Baby K as soon as he’s born,” said Dr. Sydlebaum.
~’It will be interesting to see whether his powers have become even stronger by that time or have faded away,”