Uri opts for a hands-on approach to Becks foot

Uri opts for a hands-on approach to Becks foot 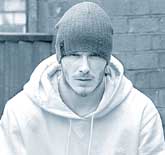 Geller wanted viewers to touch their TV screens and concentrate on mending the star’s broken bone when he appeared on GMTV between 6am and 9am.

He aimed to use the collective will to hurry the healing process and ensure the England captain is fit for the team’s first World Cup game on June 2.

A spokeswoman for GMTV said before the programme: “He will be in the studio and encouraging viewers to touch the screen and concentrate on healing Beckham’s bone with a view to a speedy recovery.”

Geller became renowned as a psychic entertainer in the 1970s, using his technique of bending spoons by concentrating and merely rubbing them.

The psychic renewed his wedding vows a year ago with his pal pop superstar Michael Jackson as best man.

Beckham was battling back against injury even before Geller’s efforts as hopes rose that he could return to action in time for the World Cup.

The inspirational midfielder was at Manchester United’s training ground receiving treatment yesterday, just hours after breaking a bone in his left foot in a crunching two-footed tackle by an Argentinean defender.

Fears that he will be out of the World Cup in June receded as United and an array of experts said they thought he could be back in six weeks – 10 days before England’s first match against Sweden on June 2.

The Prime Minister led national concern after Beckham’s injury during the European Champions League victory over Spanish side Deportivo La Coruna last night, which was initially thought likely to keep him out for up to eight weeks.

Update on the story. “It seems to have worked” says David Beckham in a documentary of his charity party.