Send Me an Angel

Tel Aviv —-August 11, 2006……One week ago a group of Israel businessmen and artists set a target of raising one million dollars in humanitarian aid within seven days. Upon witnessing the suffering of Israel civilians being bombed daily by a rain of Katusha rockets in northern Israel and a lack of money for governmental assistance, they moved into high gear. Tonight that target became a reality as the Israel humanitarian organization Israeli Flying Aid honored both Israel civilians living in underground shelters and Israel Defense Forces soldiers who have died or were wounded in Lebanon.

“This was a group of Israel businessmen, artists and anonymous donators who received a civilian “Tzav Shmona” (emergency IDF call up) for a very special project,” said a leading Israel domestic PR CEO who chose to remain anonymous. “Last week we realized that essential needs were critical and enormous. That there was not enough money within government organizations to clean the air raid shelters, provide electricity, tables, beds and communications equipment. We quickly went into action retaining legal, accounting and logistical support for our brothers in the north.” 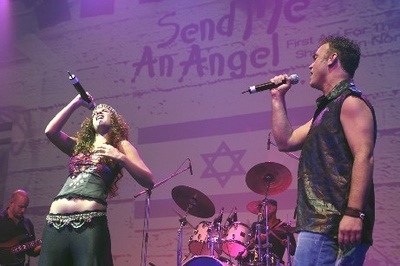 Against a 360 degree backdrop of projected black and white pictures of Israel civilians laying in air raid shelter beds, firemen, police and IDF soldiers defending Israel, an entertaining but subdued fund raising program began in a Tel Aviv’s up scale port section. There was an association made between the Holocaust and Iran Hezbollah’s openly stated comment of “wiping Israel off the map” as pictures of Holocaust victims lying in their cots were flashed upon the hanger’s walls next to Israelis suffering in the shelter beds today. There was also a contrast made between a green open field with white doves and butterflies flying next to black and white images of people imprisoned in gray cement shelters.

This was an honest and vivid display of Jewish solidarity by the rich, the poor, the businessman and the soldier. Israel philanthropy was at its best with those organizing this special event remaining anonymous. No one was waiting for aid to come from the United Nations. Liel Kotel, an internationally-known singer from Kibbutz Kinneret, was the star of this event in support of residents of northern Israel at Tel Aviv’s Hangar 11.

Israel philanthropists and members of the business community were asked to participate by purchasing tables for $10,000. They were joined at the fund raising event by five of their own guests and five soldiers and displaced residents from Kiryat Shmona, Metulla, Nahariya, Safed, Tiberius, Carmiel, Haifa and other northern Israel towns, cities and Kibbutzim.

Fundraisers reached their goal of selling at least 100 tables to meet their goal of raising a minimum of $1 million in humanitarian aid. All proceeds from the event will be distributed by the Israeli Flying Aid Society, an organization dedicated to providing “life saving aid to people affected by natural and man-made disasters” around the world. Organizers stated that this was the first of several fund-raising events to take place for Israel’s devastated northern community.

Among the group’s previous work were efforts to aid earthquake survivors in India and Indonesia and victims of Hurricane Katrina in the United States.

A children’s choir closed the show with a rendition of history’s most successful fundraising song, 1980s classic “We are the World.” Organizers say they are spending no money to stage the show, with food, lighting, venue rental and other fees all donated. 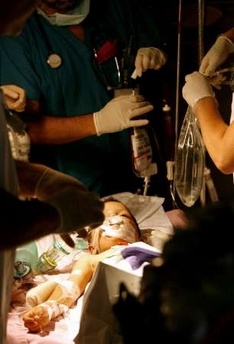 A boy receives treatment at Nahariya hospital after a Hizbollah rocket
hit the town of Deir el-Asad near the Israel-Lebanon border.

“I was born in Israel and served as a paratrooper, I had to come home,” Uri Geller told the INA. Geller, who resides in England, said: “Israel’s international PR is weak compared to the Arabs. I was asked to provide some magic and smiles for Israel, and I did not hesitate for a second.” Geller is who more than familiar with Israel’s critical challenges serves as the International Chairman of Magan David Adom (the Israel equivalent of the Red Cross).

“I’ve had Nazi swastikas painted on my front door, I have witnessed hate and terror from both inside and outside Israel. Terrorism must be eradicated. I fully support the Israel government’s decision to defend herself and salute those Israelis who suffer in shelters and our boys in the IDF who are sacrificing their lives for our very survival. I am proud to be home and like all those who are here tonight look forward to coordinating more events such as this one.”

Uri Geller performs magic for children at the “Send Me An Angel” event. Geller: “The real magic
will be to get these children out of bomb shelters and remove all threats of terrorism.”

The organizers chose to call this first event “Send Me an Angel” both because of the song and because they say they consider northern Israel’s civilian population the country’s “angels” in the current crisis. “We want to help these heroes, the angels of the North, who through their perseverance and persistence are strengthening all of Israel in this campaign.” About 2,000 people participated at the Israeli Flying Aid fundraiser. “We created a moving performance to raise money for those who are suffering. And we take pride in the success we captured tonight.” 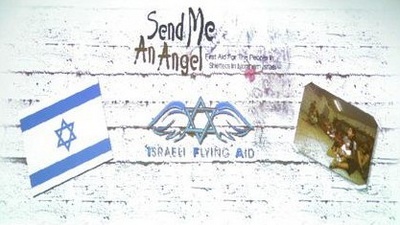 The event was broadcast live and a video of it can be viewed over the Internet.

Gal Lousky, the creator of Israeli Flying Aid, was wounded by a Hezbollah Katusha rocket from Lebanon while providing relief assistance in the north. “Not many know that I was wounded, including my mother who I did not want to worry about me,” Lousky told the INA. Lousky, upon the event’s completion with a rendition of Jerusalem the Gold and all 2,000 participants standing for Hatikva, was overwhelmed by the event’s success as tears poured from her eyes. She was not alone tonight. For many others cried as they remembered both the Israeli civilians who were murdered by Iran Hezbollah rocket attacks and the IDF soldiers who fell while searching for Hezbollah terrorists.

Since the Hezbollah – Israel war began on July 12, Hezbollah has fired more than 3,050 Iran rockets into Israel. Over 41 Israel civilians, Jewish, Christian, and Muslim, have died as a result of these cross-border terror attacks, and more than 1,700 have been wounded. More than 81 Israel soldiers have been killed in rocket attacks and in combat defending the Jewish nation. 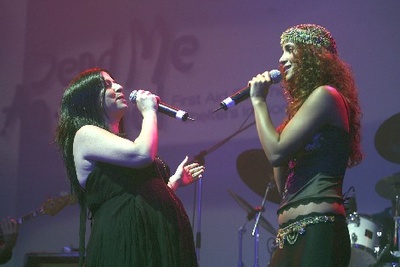 Further information about the Israeli Flying Aid event can be found at sendmeanangel.tapuz.co.il