Every news organisation in Britain was hammering my phone with calls,
texts and emails when the news broke that Michael Jackson could be
flying into Britain to fight financial claims by Sheikh Abdullah, son
of the king of Bahrain.

That’s why I was staggered by the response to my UFO live television special in Germany: 94 per cent of viewers said they too believed that alien lifeforms have visited Earth.
And as our experiments unfolded to make contact with intelligence from beyond this galaxy, an incredible 150,000 people phoned in to described their experiences. Many sent drawings which they had made ‘automatically’ while their minds were reaching out for telepathic rapport with the ETs. 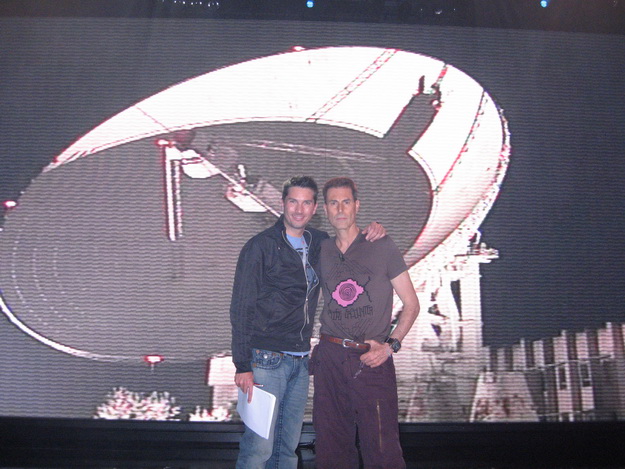 We invited everyone to submit a message via our website, to be beamed into space from a colossal transmitter in the Ukraine. I’ve been a satellite TV fan since the technology began, but I’ve never seen a dish that big — it was literally the size of a football pitch.
“These messages are heading out into infinity,” I told viewers. “They will travel forever! Maybe 500 years from now somebody, not a human being but a far-distant extraterrestrial being will see your message or photo… in this universe or beyond.”
That concept blows my mind. Long after, we have passed to the next life, our words will still be searing across the galaxies at the speed of light.
Because no one knows whether aliens communicate by tuning into radio signals or into thoughts, I also urged viewers to transmit their messages personally, by telepathy.
One eerie green figure made immediate contact… his name was Mark, he came from New Zealand, and he was covered from head to foot in alien tattoos. When he turned his back on the camera, a slant-eyed extraterrestrial glared from the back of his bald scalp. He could even make its face move, by contracting his own facial muscles. 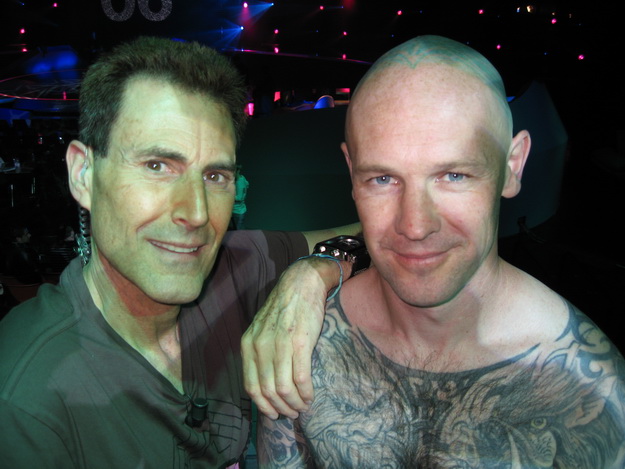 Extraterrestrial? Alien? Not, Mark is just a Down-Under from New Zealand

I asked Mark whether the tattoos had been painful, and he shrugged. “I’d go through anything to make contact with aliens,” he said earnestly. “My deepest desire is to be abducted. And I know in my heart that it’s going to happen.”
My co-presenter Stefan Godde coped brilliantly with the weirdness all around us. He has a natural gift for live TV, speaking fluently off the cuff without pausing or stumbling.
If you knew nothing about hosting a show, you could easily make the mistake of thinking it’s all done with auto-cues. In fact, the best presenters never read a word from the prompt screens — it makes them look glazed and awkward.
I try to stick to my script, which I learn laboriously by heart before every show, but often the energy of the moment carries me away and I launch into an impromptu flight of mindpower fancy.
To keep the director in the picture, though, I always bring the ad libs to a climax with my 1-2-3 catchphrase, “Achat, Shtaim, Shalaosh!” 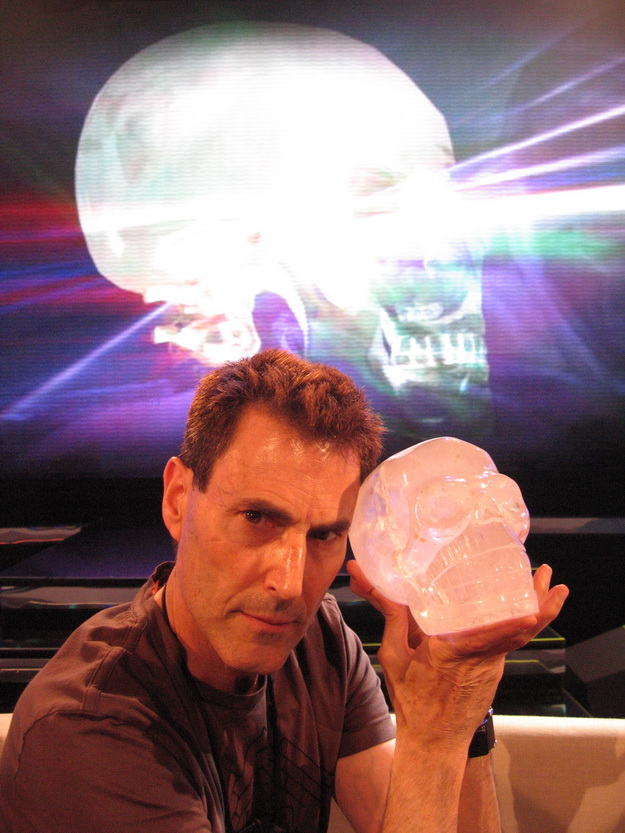 This mesmerising skull, carved from rock crystal by Mayan mystics during Mexico’s ancient past, has reignited my fascination with these artefacts.

Regular readers will remember that, driven by my life-long passion for crystals, I recently came close to buying a 2,000-year-old skull — only to back out after being terrified by a series of nightmares.
Now I am preparing to bid on not one crystal skull but a pair, offered to me by a 94-year-old Peruvian native who inherited the prehistoric artworks from his great-grandmother. I will listen to my instincts, and if the nightmares return then the deal is off, but after handling the skull pictured here I am convinced that not all such relics are cursed.
The vibes I sensed as I turned the mystifying object in my hands were overwhelmingly powerful and energy-enhancing. I felt the dedication of its sculptors too — each skull took 150 years to make, taking shape from raw crystal as artisans rubbed it with sand.
It seems probable to me that the skulls were dedicated to a variety of Mayan gods, some benevolent and wise, others evil or destructive. Rock crystal soaks up thought-waves along with other kinds of energy, such as the Earth’s magnetic resonance: maybe the prayers of the Mayan priests are still trapped in the translucent skulls.
As I held the skull on camera and invited viewers to focus their thoughts on it, I knew without doubt that this mind-blowing relic was tuned to wholly positive frequencies.

As we flew back from Germany, I got into conversation with an articulate teenage football fan who was brimming with well-informed opinions. He clearly didn’t recognise me, so I asked him whether Spurs or Newcastle could win the Premier League this season… and when he declared that it was impossible, I offered to prove that impossible things sometimes happened. And then I bent a spoon for him.
Open-mouthed, he disappeared to show the evidence to his family, and five minutes later he was back: “My Dad says you must be Uri Geller, and he’s met you.”
“Great,” I said. “Maybe I remember him. What’s your Dad’s name?”
The young man grinned. “Gary Lineker,” he said.