Part 1: Sting and the Scorpion Tail

The award-winning musician Sting once said that he could bend a spoon with the power of his thoughts, according to Uri Geller’s website. I had spoken with Sting during a press conference years ago and asked him what he thought of the “Macedonia issue.” He told me that the English are not taught very much about Alexander the Great. So I wrote a brief outline of my lost tribe folklore discoveries and asked Uri to forward it to Sting. 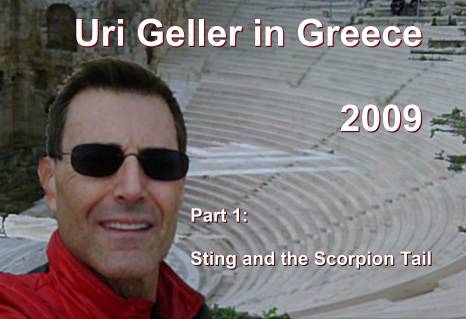 At around 700 BC, Babylon invaded Israel and supposedly carried off the so-called “lost tribes,” including the tribe of Mahaneh-DAN, together with the Ark of the Covenant. Not much later, a Pelasgian refugee tribe appeared in the Balkans, calling itself Mahe-DAN (Mahke-don, or Macedonian).

The gold larnax or royal box (left photo) found in a Macedonian tomb in 1977 fits the description of the lost Ark of the Covenant, with a star-crown on its lid (Star of Jacob). Few ancient artifacts bear such a close resemblance to the lost ark. Other legends say that the biblical ark was brought to Ethiopia, and that a priest carries a replica of the ark (right photo) during religious holidays. Notice the similarities of the star-crown in both photos.


* * *
Uri Geller’s latest TV show, The Successor (The Next Uri Geller) originated from Israel and swept throughout the world. The ANT1 premiere of the Greek version (? d??d???? t?? Uri Geller) hosted by Christos Feredinos was the prime-time winner in its launch on October 24. 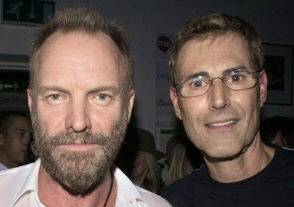 After watching the first show, in which Uri asked his viewers to put spoons and old clocks near their TV sets, I went through a strange happening on October 25. A few days earlier I had written to Uri about Sting’s psi-ability. Sting’s birth name is Gordon Sumner. On Sunday evening I had the notion that I could hear Sting say: “I’ll give you an hour!” An hour to do what? I thought to myself and quickly forgot about it. Meanwhile, on the previous night, my sister had taken out a broken alarm clock and placed it near a TV set.

About an hour later there was a sudden power failure on my entire street and all the lights went out. As my sister tried to light a candle, she was startled to hear the ringing of an alarm from another room. She thought about Uri’s show, and said, “I can’t believe this.”

By now, pandemonium had broken out in my apartment building. People came out of their flats in their pajamas with flashlights. The shrill ringing sound was coming from a burglar alarm on the sixth floor and the woman who lived there didn’t know how to turn it off. The hectic incident lasted about an hour before the lights came on again. An hour to do what? To complicate matters, that same evening at my place of work (on another street of Athens) the outside telephone lines suddenly sparked a short circuit and our cabling needed to be replaced by the phone company.

On November 22, Uri Geller and master painter Andreas Charalambides exhibited their joint lithograph book “Symbols” with 11 lithographs at the Argo Gallery in central Athens. I went to the gallery and spent about five hours there, talking with Uri Geller and his guests. On that occasion I also observed Uri bend three spoons.

Most of Uri Geller’s critics claim that he bends spoons by one of the following trick methods:

Yet none of the above explanations correspond to the details of what I closely observed. 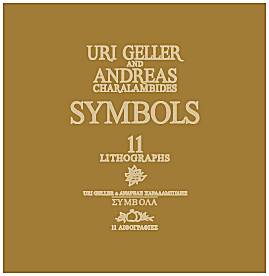 As Uri chatted with an elderly gentleman from a humanitarian group, someone brought a spoon from the café next door. Uri held the spoon’s bowl with his left hand and lightly rubbed the handle with two fingers of his right hand. The handle then started to slowly bend upward. Uri said if the spoon is placed on a metal surface, it bends faster. He then balanced the spoon on the metal armrest of a lounge chair. But because the spoon was still bending, it fell to the floor. The spoon continued to bend by itself as it lay on the floor. The curious part is that the spoon’s handle bent up, not down, as one might expect if gravity were pulling on the weight of a pre-softened metal rod.

For a moment it reminded me of a scorpion lifting its tail. In a dreamlike way, the spoon seemed to have a life of its own. It wiggled around on the floor! Uri then picked up the spoon and handed it to the elderly man. It continued to slowly bend in the gentleman’s hand until it reached a ninety-degree angle. I then touched the spoon at the crease where it had bent. I realized that I would not be able to straighten it back into shape unless I used both hands with the spoon handle leveraged on my knee. The spoon ridge was hard and firm, not soft or malleable. It was not warm. And there was no feel of powder or emulsion on it.

I watched Uri do the same thing with two other spoons that were given to him by other guests of the gallery. Uri Geller’s critics should recall that he has been bending spoons since the age of five, and that there are witnesses to that reality. If a new-fangled substance or tiny electro-magnetic gadget that could rapidly twist metal existed in the early 1950s, it would have been sold to major industry, not as the plaything of a child. My own observation is that the Geller Effect is very real, although still unexplainable.