Jackson was greeted by Lord Janner, a peer from the governing Labour Party, “Uri is a great friend of mine” … and asked whether I could arrange this for him because Michael wanted to see the Palace of Westminster,” Janner said. “I think this is great fun, a marvelous occasion, totally unique.”

Jackson’s entourage, including the psychic Uri Geller and American illusionist David Blaine, swept up to the House 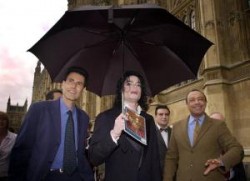 of Commons in a convoy of limousines with blacked-out windows Friday morning.
U.S. pop singer Michael Jackson (C) talks with psychic Uri Geller (L) and magician David Blaine (R) on arrival at the House of Lords at the Palace of Westminster in central London, June 14, 2002. Jackson is on a brief visit to the UK, during which he is also due to take part in a charity fundraising event in Exeter with both Geller and Blaine later on Friday. REUTERS/Michael Crabtree

The singer, wearing a black tuxedo with satin lapels and a white wing collar shirt, posed with Janner and Geller on the steps of Parliament before going inside.

Famously media-shy, Jackson had little to say, beyond remarking that “this is all incredible.”

Jackson met the Lord Chancellor, Lord Irvine, and attended a birthday party for Paul Boateng, recently appointed chief secretary to the Treasury in a Cabinet reshuffle.
He was also shown the debating chambers of the House of Commons and the upper, unelected House of Lords as 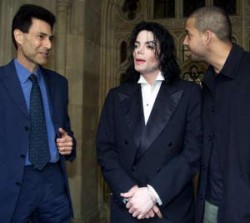 well as the historic Westminster Hall, where the body of Queen Mother Elizabeth lay in state after her death earlier this year.
Parliament was not sitting Friday, so there were few lawmakers around. But as news of the singer’s arrival filtered through to staff, a handful gathered to wait for his arrival.
Later, Jackson was to travel by train to the southwestern English city of Exeter, where he was to be made an honorary director of Exeter City Football Club.Asked by reporters outside Parliament if he liked soccer, the star replied, “I know nothing about it.”

The three friends were traveling later to the southwestern city of Exeter for a children’s charity event organized by the local soccer club, where Uri Geller is a director.