What impact did the people of England, have on the world cup result?

As I said in last weeks article, I’ve been football mad since age 5 after watching my first live football game in Tel Aviv in 1951, and I – as the whole of the country did –  hoped England could go further this time. Perhaps all the way, with the amazing players Capello had including Wayne Rooney who many experts believe to be one of the very best players in the world at the moment! So what went wrong? 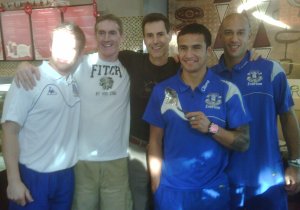 Uri with Tim Howard (Goalie for USA in world cup 2010) and other Everton players.

Keeping in mind what I said in last weeks article about directing the power of combined thoughts & energy to the positive, and that England should have done so much better, could it be that the reason England went out so early, is that we were not all backing the team with positive thoughts & energy?

People hoped – but did people truly BELIEVE that England were going to win? Did millions visualize victory, England coming home with the cup? Did the people of England feel victorious from the outset?

Since I was a young child, I began using the law of attraction to literally shape my life with the use of powerful visualizations. I didn’t know what I was doing at such a young age, all I knew was that I felt good doing it, as the things I was visualising  were far nicer than the reality which surrounded me as a young boy growing up in Tel Aviv. I have come to realise as an adult however, that all the incredible things that have happened to me & the great things, people, experiences and circumstances in my life, are thanks to my habitual positive application of the law of attraction.

In the group stages, even after the first game the nation was already beginning to vocalise in unison, disappointment in the way the team were playing – take yourself mentally back to the early games, and be very honest, were your thoughts & feelings, and your words towards England and the chances of doing well in the world cup, positive or negative?

If you’re being honest & you’re like most people, your thoughts, feelings & that which you were expressing in words to friends & colleagues,  were not completely positive, and you were probably not visualising England holding the cup. Some of the UK press helped to build the negative emotion, much of which was pointed towards the manager & his chosen system.

Looking at the faces at those on the pitch & on the sidelines, it was apparent to me that the players, the manager & everyone on the bench – shared this lack of confidence with the English public. Do you remember seeing any of the England Team looking like they were full of confidence & excitement?

The way they played spoke volumes, even Rooney who many argue is the best football player in the world at the moment, was unable to produce one impressive piece of football in any game, and the blunder from Robert Green, a goalie capable enough to be picked for the England squad, is evidence that there was more than one player on the squad who for some reason was not playing anywhere near to the level they can usually be counted upon to play.

If you believe in the law of attraction, and you understand the power that one persons emotionally charged thoughts & feelings have, can you imagine how powerful the combined energy, thoughts & emotions of millions of people, would be?

In the run up to Euro 96, I tried an experiment in the Daily Mirror in which I attempted to get the English public to collectively use the law of attraction to help England to be successful. It was only an experiment ran in one major newspaper, and some may say it didn’t work as England didn’t win Euro 96 – but they got all the way to the semi finals, and were only knocked out (again, by Germany) in the penalty shootout!  Who knows what may have happened if the majority of England was involved with the backing of multiple newspapers & television stations?

If the concept of the law of attraction is new to you – then I would encourage you to seek more information & guidance on this amazing universal law which some of the most well respected & successful people throughout history were known to have understood and to have spoken of.

Copyright © 2023 On Limited (its licensors and others)