Why I Bought Lamb Island

Television presenter and world-famous mystifier Uri Geller revealed today that he is the new owner of a mysterious and enigmatic island claimed to be one of the Great Pyramids of Scotland. 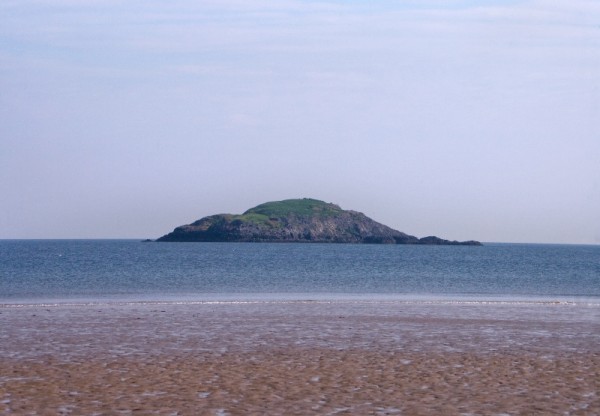 Lamb Island, a volcanic outcrop in the Firth of Forth north of Edinburgh, is one of three rocky outcrops which mirror the layout of the Pyramids at Giza, near Cairo in Egypt.

“I am fascinated by the connection between the pyramids and these islands,” said Geller, 62, who is currently filming in Holland and Germany his reality TV show for mentalists, The Next Uri Geller.
“The connection has been known for centuries — you can read about it in a fifteenth century manuscript called the Scotichronichon, by the Abbot of Inchcolm, Walter Bower. So when I heard Lamb Island was for sale, I felt a strong instinctive urge to buy it — and the more I delved into the history and the archaeological lore which surrounds it, the more certain I became that this is one of the most significant sites in Britain.”
Geller was first alerted to the existence of Lamb Island by a story in the Times on October 19, 2008, which said a Brazilian-born internet entrepreneur, Camilo AgasimPereira, who owned the title of Baron of Fulwood and Dirleton, was planning to sell the island. He had been bequeathed it in 2002, and had never set foot on it. Agasim-Pereira now lives in Florida.
“The asking price was £75,000, but after negotiations we were able to settle on a fee of just £30,000,” Geller said. “This island has links not only to the pyramids, but to King Arthur, King Robert the Bruce and to the ancient Kings of Ireland too. It might seem forbidding, and it is certainly uninhabitable, but it is also one of the keystones to British mythology, and I am thrilled to be its owner.”
The connections to myth can only be understood by tracing leylines, the mysterious invisible paths which dowsers claim to be able to sense as flowing lines of energy. To many dowsers, leylines are as real as streams of underground water — but unlike water, leylines follow rigid patterns and run in straight lines. They link most of the world’s significant archaeological sites, such as Stonehenge, the Pyramids and the great temples of south-east Asia,
as well as obscure monument and buildings connected to powerful religious societies from long ago, such as the Knights Templar.

According to research published by a historical investigator named Jeff Nisbet, in the magazine Atlantis Rising, in September 2002, there are three crucial Templar sites in the UK: the village of Temple, Rosslyn Chapel and the Isle of May. This last is believed by some Arthurian scholars to be the real location of Avalon, the island where King Arthur was laid to rest and await his return as the Once and Future King.
Lines drawn between the three points cut through a pair of islands in the Firth of Forth, called Craigleith and Fidra. And lying between these is a third outcrop: Lamb Island.
What Nisbet realised is that the three islands are arranged in precisely the same crooked line that marks the layout of the Pyramids at Giza, built by the Pharoahs 4,500 years ago.
That layout famously matches the three stars known as Orion’s Belt, and Nisbet discovered that anyone standing on the battlefield of Bannockburn, where Robert the Bruce defeated the English army in 1314, on the anniversary of the battle on June 24, would see the three stars (Alnitak, Alnilam and Mintaka) rise exactly over the three islands of Craigleith, Lamb and Fidra.

And if the royal connections to Arthur and the Bruce were not enough, a line extended from the Isle of May through Lamb Island will cross Tara, the burial place of the ancient Irish kings. More improbable yet — but nevertheless true — is the name traditionally given to the stars of Orion’s belt: the Three Kings.

“I am a deep believer in what Carl Jung called synchronicity, the power of connections between things which are linked by forces we don’t understand,” said Geller, who lives with his wife Hanna in a manor house in the Berkshire countryside, beside the Thames. “And there are many clear synchronicities that come together on Lamb Island. I have heard it said that the bloodline of the Scottish Kings — and so that of Queen Elizabeth II herself — can be traced back to the pharoahs and to the Jewish patriarch Noah, of Noah’s Ark, through an ancient Prince and Princess called Gaythelos and Scota. I like to think that when they landed in Scotland, the first place they moored was in the Firth of Forth, off Lamb Island.

“I am proud to have this opportunity to preserve it, not just for its mythological and historical connections but for its conservation value — Lamb Island is part of a Site of Special Scientific Interest. I can’t build there, of course, but it is home to countless seabirds, and perhaps to seals too. And before long, I hope to pay it a visit. I might need a helicopter, but I am determined to set foot on my island soon.”

In April of 2002 Falkirk–born historian John Walker initiated my interest in Scotland’s history when he asked me to find the site of the Battle of Falkirk of 1298, in which Edward I defeated the Scots in revenge for Stirling Bridge the year before. Despite many theories, its location has never been verified. No artifacts have been uncovered, I believe only two bodies were unearthed.
I would love to investigate further some of the country’s historical and modern mysteries.
National Library of Scotland – Rare Books Important acquisitions – Scotichronicon – the key text of early Scottish history.
The Lamb: A metaphor for Jesus Christ used primarily in the Book of Revelation.
For further amazing information please visit http://www.mythomorph.com

What surprised me is that The Firth contains several small islands, the more significant of which are the Bass Rock, Cramond, Craigleith, Eyebroughy, Fidra, Inchcolm, Inchgarvie, Inchkeith, Inchmickery, Lamb and, farthest out, the Isle of May which = 11 islands!

I thought that the weather on Lamb isn’t sun kissed….it’s rain drenched for about 364 days a year. It was pointed out to me that in fact this part of Scotland is the driest and sunniest.

I am going to live on my island….

OK, it’s only for one day and one night – but I thought it would be rediculous to buy an island, and then never set foot on it! So, this Saturday the 6th of March, I will be going to Lamb island, with Shipi, and “Island Man” Andy Strangeway, a UK Adventurer who’s ambition it is to spend a night on every island in the UK.

Shipi & I are leaving London at the crack of dawn, and heading towards North Berwick, where we will arrive some hours later in the early afternoon. We’re going to spend some time visiting the area, including a visit to the Scottish Seabird Centre. So if you are in the area, come and say hi!

We’re then going to jump on a boat, and go on a tour of the islands near to Lamb, including Bass Rock & Craigleith – before landing on Lamb, and treasure hunting!

The first thing I want to do, after having a good walk around the island, is to use my dowsing abilities to see if there is any truth to the ancient legend which points to exiled Egyptian princess Scota having hidden Egyptian treasure on the island. The archealogical myth & legend surround Lamb, are huge in comparison to the size of the tiny island, and I can’t wait to find out if there is any truth to it. I have helped countries to find their gold & oil deposits searching thousands of square miles of possible locations – so if there is treasure on my little Island – I will find it!

If I do find it – no, it will NOT be going on Ebay! It will be split jointly between the Museum Of Scotland and the Egyptian Museum in Cairo.

Landing on the island is NOT going to be fun, I’m led to beleive – and nor is sleeping on it.

Some years ago, some brave souls decided to spend a night on the island,and reported that it very dangerous & difficult to land on – and even more difficult to sleep on, with their being very little flat land to pitch tents & to sleep on. They recommend that anyone else wanting to sleep on the island, take some very comfy pillows with them – so I’m very thankful for their previous trip to the island & their useful tip! 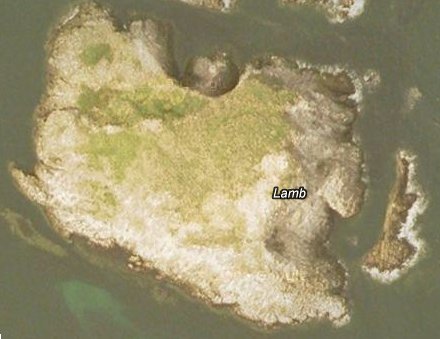